Broadcast 2 uses FM radio broadcasts, which can be tuned at the installation site. It consists of several dozen old portable radio sets, placed on shelves on the wall so as to evoke the sense of an electronics shop or junk store. All the radios work and play individual available sessions, while they are programmed to change their volume and tune to a different station according to a predetermined score. This results in a sound composition that it based on the program of available radio stations.

This play on the transformation of an image into a sound installation is typical for Jan Krtička. As an artist he focuses on the spoken word and uses sound to document various situations (his own works, a trip, past performances, etc.). He accentuates concept and the final arrangement. The output medium is not overly important to him: near pure, minimalist installations viewers become listeners, who are encouraged to become actively involved – they compose the final work in their minds themselves. 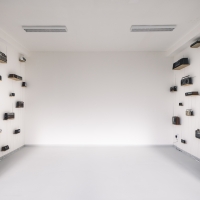 In Zittau the visual artist Mark Ther presents Mitsu, a short film from 2019. Mitsuko Thekla Maria, Countess of Coudenhove-Kalergi, was the first Japanese woman to come to Europe at the turn of the 19th century. She lived mostly in the border region, by the border with Bavaria to be precise, where she managed the chateau in Poběžovice, a property she had inherited from her late husband, Count Heinrich von Coudenhove-Kalergi. Mitsuko was a strong and well-educated woman, although she never stopped yearning for her homeland. Ther’s work is freely inspired by historical sources. It stems from his unique imagination and his proven flair for an untold story. The film Mitsu was presented at Febiofest in Bratislava, the Sarajevo Film Festival and in Košice.

In 2011 Mark Ther became a laureate of the Jindřich Chalupecký Award. He was nominated for his twenty-minute art film Das wandernde Sternlein (Wandering Star), which centres around the topic of lost children in the former Sudetenland. As with his short film Das wandernde Sternlein, Ther focuses on taboo and marginal topics of everyday life and history (sexual abuse, Sudeten German culture, queer issues, etc.). 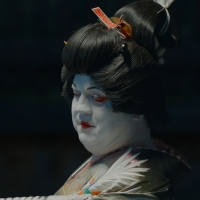 Patrik Adamec is part of the rising generation of sculptors. He now studies at the Academy of Fine Arts in Prague in Sculpture Studio I / Lukáš Rittstein’s school. Previously he studied at the CTU Faculty of Architecture, where he focused on industrial design, architecture and urbanism. He now draws on this experience in his sculpture.

The Relatable series is an autobiographical work, into which the artist transforms his innermost feelings. The viewer can see that the series decomposes the figure of the author; it is serious, existential. The topic becomes everyday life, work, stress. The author recycles materials, works with concrete, wood and glass, and vacuum-packs. And reflects the artist’s identity: How important is it to study? And to be financially independent? Should art be the main source of an artist’s income? And how to cope with the uncertainty of the future? 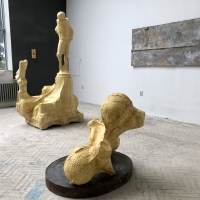 The artistic and architectural duo of Lenka Hamerlová and Anna Machátová has been collaborating since 2018. They both study at the Faculty of Arts and Architecture at TUL. Since the very beginning their work has focused on new media and film. Their artistic videos are delicate yet powerful, rational and emotive, entertaining yet at the same time boring. Most of their works are linked by the topic of gender. 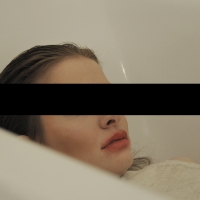 Petra Hudcová comes from Prague, but has always been attracted by foreign countries. She studied at Leeds Metropolitan University and Central St. Martin’s College of Art & Design in London. She has participated in several residencies, such as: CEAC in Strasbourg, ArtPort in Tel Aviv and Waaw in St. Louis in Senegal. Recently she has been creating installations that are reminiscent of games, in which the viewer can in some way participate. These games are metaphors of the systems to which we belong or from which, in contrast, we are excluded by a set of rules, language, or the ability to read and understand. Petra uses man-made or found objects that are carefully arranged, but also recall the consequences of events which have probably already taken place. These installations and objects remain partially incomprehensible, yet appealing. The viewer strives to find the rules or a hint to decode the story to be followed. 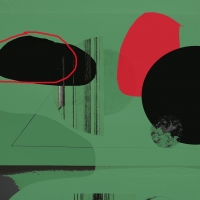 Kovanda’s unobtrusive events or installations may at first seem ridiculous. The artist uses commonly available everyday objects (peas, branches, chewing gum, sugar, coins). Even so, he is able to touch upon topical social themes. He is the most world-famous Czech conceptualist. He organised his first performance in a public space back in the 1970s with romantic enthusiasm, simply because he had realised that something like that was actually possible. Behind the Iron Curtain he was liberated by the idea that “he needs nothing at all, and yet he can do something”. With his small and simple events Kovanda strives to break down routine situations, stereotypical behaviour and interpersonal relationships. Minimalist interventions disrupt the barrier we build around ourselves: “Just a small shift away from how a person normally behaves completely transforms our perception of what goes on around us.” Key projects undoubtedly include Na eskalátoru [On the Escalator]. It took place on 3 September 1977 in Prague and again on 10 March 2007 in the prestigious Tate Modern Gallery in London. There, Kovanda also executed Líbání přes sklo [Kissing through Glass]. On 11 September 2007 he also first implemented Náhrdelník [Necklace] – a line of balls made up of small peas, which he composed until it was complete and whole – thus leaving it to its own fate. Peas are a recurring motif in Kovanda’s work; they become the symbol of human behaviour, gestures or mere moments.

The new-media group MRAK and its augmented reality gallery is a platform for digital art in the city. It consists of a team of students and graduates of the Faculty of Arts and Architecture of the Technical University of Liberec. The artists set themselves the goal of creating locally specific virtual works in the city’s public spaces. They want to prompt viewers to engage in debate and thus help to improve the living space.

You can run the virtual, audio-visual work V prachu se obrátit [Turn in Dust] on náměstí Českých bratří square as an augmented reality application on your mobile phone. In formal terms you view a new depiction of the situation through the camera and the display of your telephone. The inspiration and motivation behind this digital memorial, as it were, is the former Evangelical church (which used to stand on the site from 1864 to 1976). The square becomes a place of memories, history, conciliation and the anticipation of the new. 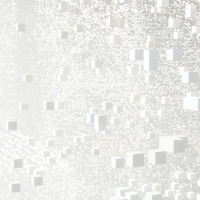 The painter and sculptor Frank Maibier, who admits to being influenced by Saxon constructivism and who developed his style in the face of the fundamental transformations that occurred in eastern Germany after the fall of the Berlin Wall, is one of the leading initiators of his generation. In the 1980s he started to focus on music and experiment with his typical material, paper, which he layers, perforates, folds… Like many other artists, he did not move to the West in search of easier to conditions to work in. He stayed true to his birthplace and as soon as the situation permitted, in the early 90s, he also became an active driving force in the cultural and social life of Chemnitz. In 1991 he and a group of local artists established the Oscar association (now part of the Weltecho cultural space), where he later also became the curator of the gallery of the same name. Several years later, together with Andreas Winkler, he discovered the magic of sound installations, or “Klangarbeiten”. The combination of music and visual art still characterises him to this day. His expansive installations, spreading into space, usually consisting of a single simple repeating shape, are reminiscent of harmonious musical compositions or a living organism. He also draws inspiration for his pictures and sculptures from literature and nature, amongst other things. 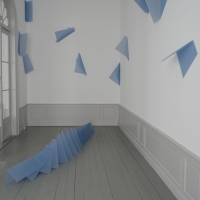 Bitcoin, NFT, blockchain, cryptocurrencies, smart contracts – the new technological trend disrupts the stale framework and the way things work. It confronts us with new questions and forces us to reformulate solutions to old problems. The blockchain is not a miraculous drug to treat all the world’s ills; first of all, it is a specific type of distributed database solution, and secondly a narrative system, which can open our minds up to the future. Will it be purely technological? What role will be played by man and his imagination? How will we manage our digital identities? How will we control collaboration between people and machines. And how are artists and designers already responding to this situation now? How can we as users speculate about this technology? In the workshop we will be focusing not on the technological, but on the narrative aspects of the blockchain. We will be pondering the consequences of technological determinism, and through design fiction will be attempting to critically consider possible scenarios for a remote, technologically saturated future.

UROBOROS, a festival and all-year-round platform focused on critically and socially engaged designer and art work aims to explore how art and design can contribute to positive social change. The group’s name is inspired by the symbol of Ouroboros – the mythical snake that eats its own tail, thereby growing out of itself in an endless cycle of re-creation. The image of Ouroboros embodies global social, political and environmental frustration. The workshop will be led by the group’s founding member Michal Kučerák, a curator and lecturer who works for the DOX Centre for Contemporary Art and TBA21–Academy; a PhD student at the Faculty of Fine Arts of Brno University of Technology. Kučerák is also the man behind the #DATAMAZE project, an augmented exhibition concept, which was launched in 2018 with the aim of improving digital and data literacy through contemporary art projects in a gallery environment. In his work he focuses on mediating art and critical artistic and design practice as a medium for educational projects. 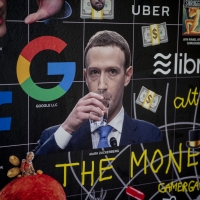 Auxig is an international team of sound and visual artists based in Ústí nad Labem. It comprises Petr Hanžl (CZ), Polina Khatsenka (BY), Jan Krombholz (CZ) and Barry Yuk Bun Wan (HK). It is based on open collaboration, media working with time and work with conceptual and physical space, which each artist approaches with their own particular style and technique. Their presentations are most often audio-visual site-specific performances, which often open up into spatial installations.

Some of the most common themes that run through their work include the context of place, acoustic ecology, field recordings, interactivity and blurring the boundaries of authorship. Their show at the Regional Gallery in Liberec is inspired by the Jizera stream that rises in the Jizera Mountains below Žulový vrch hill between the neighbourhoods of Ruprechtice, Starý Harcov and Rudolfov. At the turn of the 19th and 20th centuries the people of Liberec used this stream for recreation, especially around Lidové sady. Nowadays, however, most of the stream runs underground, hidden under buildings. Auxig symbolically brings it back into the natural environment through sounds and images. 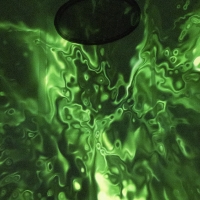